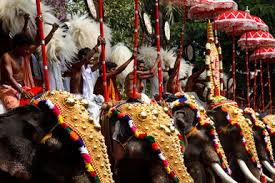 The tradition of using elephants in India’s temples and festivals dates back to 8,000 BC. There are an estimated 800 elephants in India that are still held captive in temples. The majority of temple elephants are located in Southern India and especially concentrated in the Kerala region. These elephants are often owned by the temple, and the more prestigious temples will normally have at least one elephant. The temple at Guruvayur actually owns more than 60 elephants. The animals are kept in camps in literally what can only be described as hellish conditions. There is no compassion or veterinary treatment for them, and scars or injuries sustained through abuse are left to fester and worsen.

The elephants are usually used for religious ceremonies and festivals that take place during the hottest period, between February and April. They are draped in a caparison (ceremonial robe) and a solid gold mask, and paraded around for hours on end without food, water, or rest. The majority of elephants are bulls, and although musth (a periodic condition in bulls when they experience highly elevated testosterone levels) usually occurs in winter months, it has been known for elephants to participate in ceremonies and festivals during this musth period. Due to this and the generally abysmal living conditions of these elephants, there have been a number of human casualties and fatalities due to aggressive retaliation by the bulls. 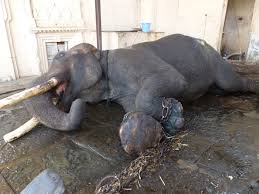