BAN IVORY IN THE UK 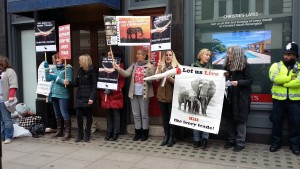 On 16 March 2016 we held a protest outside Christie’s to call attention to the ivory trade in the UK and demand a total ban on such trade.

UK auction houses and antique sellers openly sell ivory with no documented proof of the item’s date, which is both breaking the law and allowing new (and completely illegal) ivory to enter the market.

The month after our demo, Christie’s and an ivory dealer were taken to court for selling an ivory item without the necessary paperwork (the case dates to a year ago).

All trade in ivory, whether legal or illegal, contributes to the ongoing slaughter of elephants.  Wherever a so-called legal market exists, there will be a huge, unregulated illegal market where new ivory gets mixed with old.  Until all markets are closed completely, the slaughter of elephants will continue.  Poaching is still claiming the lives of around 100 elephants every day.

The laws in the UK to try and control the trade, or to try and distinguish between ‘legal’ and illegal sales, are unworkable.  There is only one solution – a full ban on all trade in ivory.

Other countries are imposing bans on ivory – including the USA and China, and Hong Kong has announced it will move towards a ban – as well as destroying ivory stockpiles, stepping up arrests and prosecutions of poachers and traffickers, and taking many other measures. The UK is shamefully not showing leadership in banning ivory. Even worse, the current government promised twice in its election manifesto (in 2015 and 2010) to move ahead with a full ban, but has twice broken its promise.

We were joined by Hugh Fearnley-Whittingstall, who came along with a filming crew to find out about the UK ivory trade for a forthcoming documentary. 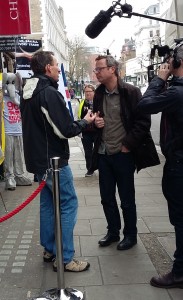 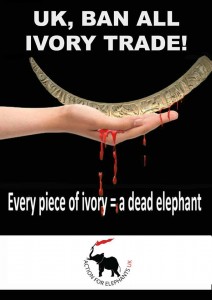