Please take action now by signing this petition to Parliament.

The protest was held on 16 November outside the DEFRA office. Around 80 people assembled to call on the government to keep its pledge to ban ivory. A letter from Action for Elephants was delivered to Andrea Leadsom.

The UK is currently Europe’s largest exporter of carved ivory to Asia. Significant amounts of ivory are also sold through online marketplaces in the UK. The existence of a legal ivory trade serves as a cover for illegal sales of ivory, while continuing to perpetuate the cycle of supply and demand that fuels poaching.

The Conservative Party pledged in its election manifestos in 2010 and 2015 to ‘press for a total ban on ivory sales’. It is now six years since their original promise was made and they have failed to implement it.

Within those years, over 144,000 African elephants have been poached for their ivory. Unless this slaughter is brought to an end, elephants in the wild may be heading for extinction in 20 years or less.

In September 2016 the government announced it would crack down on the sale of ‘modern ivory’, while still allowing the sale of pre-1947 (or ‘antique’) ivory. This half-measure will not stop the trade, and sends the wrong message to traders and antiques dealers that they can continue to sell ivory if they can provide proof of date. It has been amply demonstrated that a regulated trade still allows for illegal ivory to enter the market.

New evidence broadcast by Hugh Fearnley-Whittingstall in the BBC documentary investigating the international ivory trade proves that illegal ivory is being sold in the UK, and that this trade fuels the ivory trade in other markets. He said, ‘Thousands of pieces of antique ivory are sent to a corrupt market in Asia, which (by feeding that market) makes us complicit in the killing of elephants in Africa. Can concerns for a small section of the antiques trade really outweigh doing everything we can to save the elephant?’

At the recent CITES CoP17 conference in Johannesburg, delegates adopted a resolution which recommends that all countries with a domestic trade that’s linked to illegal international markets should close their domestic markets as a matter of urgency’. Why is the UK government not throwing its full weight behind this resolution?

With evidence that ivory from the UK is sold into the markets of Asia, both stimulating and providing potential cover for modern freshly poached ivory, we call on the government to announce a total ban on the UK ivory trade, including pre-1947 ivory, at the Hanoi Conference on Illegal Wildlife Trade.

Article in Antiques Trade Gazette on the protest: 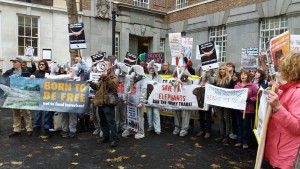