Join us at the Indian High Commission, London

20 April 2018, London. Action for Elephants UK will be gathering outside the Indian High Commission to draw attention to the horrific treatment of India’s temple elephants and the lifelong torture they are subjected to.  We will deliver an open letter to Prime Minister Modi expressing international support for the call to end the brutality and abuse. The letter is signed by a wide range of NGOs and prominent individuals across Indian society, from Hindu scholars to CEOs to business leaders, as well as by leading western supporters, including Jane Goodall, Will Travers, Joanna Lumley, Michael Palin, Stanley Johnson, and many more.

Prime Minister Modi will be in London this week and we hope he will recognize the strength of public opinion against such abhorrent practices and the harm they are causing to India’s tourism industry and reputation. We hope the agreement made by India and the UK at a summit in October 2015 on the importance of preserving the environment will see renewed commitment at the Heads of Commonwealth meeting in London this week, with strong measures to protect both captive and wild Asian elephants.

Along with Indian NGOs fighting for an end to the cruel and illegal practices, Action for Elephants UK calls on India’s leadership to take action urgently to implement India’s animal welfare laws and bring an end to the barbaric treatment of the country’s captive elephants. The alarming rise in the number of elephant deaths in recent years – in Kerala alone, 57 elephants have died in just 26 months, and the rate has escalated this year, with 11 deaths as of end-March – shows that these malnourished and mistreated animals are dying from the extremes of neglect, abuse, starvation and beatings they’re forced to endure throughout their lives.

India’s captive elephants are the forgotten elephants. While the world has rallied round to save their African cousins, with the implementation of ivory trade bans and a global response to poaching and trafficking that have pulled the species back from certain extinction, India’s temple elephants have been enduring unimaginable suffering, their plight unknown to the world at large. With no help in sight, no lessening of their daily agony, these elephants have languished in horrific conditions, beaten mercilessly by their handlers. Denied adequate food, water, shelter and veterinary care, they are tortured with bull-hooks, sticks, whips, and fire, while chains shackle their feet – often so tightly that they cut through the flesh, causing raw bleeding wounds. Forced to stand in the same position 24/7, they suffer from foot rot and many other diseases. They are paraded beneath the scorching sun on hot tar roads, and are made to run races shackled in chains, with mahouts prodding them with bull-hooks and beating them with sticks. They are treated like this all their lives, until they’re worn out and die a miserable and painful death.

Why is such extreme torture allowed?

Exploited under the veneer of culture and religion (although the abuse goes against the core precepts of Hinduism), elephants are big business. Owners make money from renting the elephants, and the temples earn big money for the state government by using the elephants in parades and rituals. It’s a multi-million dollar business in which the elephants themselves – captured from the wild as youngsters and having had their spirit crushed by rituals of torture – are no more than commodities. These elephants’ plight is arguably the worst case of animal abuse in the world. How can a country whose laws forbid causing pain and suffering to any animal turn a blind eye to this? Why does the government allow these practices to continue?

What can the public do?

We hope this protest will help to push forward public awareness of India’s forgotten, abused elephants and will rally efforts to pressure the Indian government to stop the cruelty, as the first step in ending the use of elephants in temples. We hope tourists and visitors to India will make ethical choices and will shun all forms of elephant tourism that use elephants in any unnatural way, whether in festivals or for trekking or rides or any other purpose. Tourism is very important to India, and visitors can influence government policy through their spending and buying choices. They can also boycott travel agencies that promote unethical elephant tourism. Be aware, choose with care!

‘It is unimaginable, the amount of suffering that temple elephants endure,’ said Maria Mossman of Action for Elephants UK. ‘India has very good laws in place but all of these are ignored daily, and the abusers go unpunished. Not only are elephants intelligent and sentient beings, they are an endangered species. It is the duty not only of India to enforce the laws to protect them, but of the world to hear their cries of suffering and respond to end the brutality against them. By not doing so we are failing these magnificent creatures. India, we implore you to enforce your laws and bring an end to the terrible crimes against captive elephants.’

At the demo there will be brief speeches by Dan Richardson, actor and animal activist, and conservationist Anneka Svenska.

Take action and write to the Indian consulate or Prime Minister Modi directly to call for an end to the abuse of India’s temple elephants.

WHAT: Peaceful protest to bring attention to the plight of India’s temple elephants and to call for an end to their cruel and abusive treatment.

WHERE: High Commission of India

We will deliver an open letter to Prime Minister Modi, signed by conservationists, NGOs, MPs and others.

‘Kerala is a state in southern India that has a justifiable reputation for having initiated many progressive social and economic policies. It is about time the inhuman treatment of elephants in temples was stopped forthwith.’
Paranjoy Guha Thakurta (journalist, author, publisher and film-maker)

‘No faith or religion should accommodate suffering, whether that be of a human being or an animal. No ceremonies should involve cruelty or neglect. Our forms of worship, formal or informal, and our celebrations should involve only respect, tolerance and kindness to each other and to all creation.’
Will Travers OBE and Virginia McKenna OBE (Born Free Foundation)

‘One of the most influential Indians of all time, Mahatma Gandhi, said: “The greatness of a nation and its moral progress can be judged by the way its animals are treated.” India! Listen to his words and implement them. The world supports your laws against cruelties to temple elephants, but only you can ensure that they are enforced. We shall back you every step of the way.’
Joanna Lumley (actress)

‘Nothing can justify such abhorrent torture and exploitation of India’s Heritage Animal, the endangered Asian elephants, for Ahimsa is the core tenet of all religious scriptures. The embodiment of Lord Ganesh deserve maximum protection and reverence, and we need to do everything we can to abolish elephant slavery in the world’s largest democracy, the incredible India.’
Sangita Iyer (producer, ‘Gods in Shackles’)

‘As one of the original founders of the UK’s Save the Asian Elephant (STAE) campaign, I was delighted that Prime Minister Modi and Prime Minister Cameron agreed, at the UK-India summit of October 2015, on the importance of preserving the environment and diverse ecosystems, and resolved to work together to improve protection for both captive and wild Asian elephants. I much hope that the efforts now being undertaken in India and the UK to give effect to this agreement will be further strengthened and that the need to combat illegal wildlife trade and protect endangered species, such as the Asian and African elephant, will be fully recognized in the upcoming Heads of Commonwealth Conference (CHOGM 2018).’
Stanley Johnson (founder-member, Save The Asian Elephants) 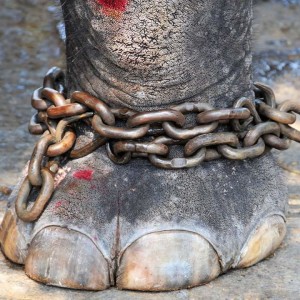