On 12-13 February 2014 the global Illegal Wildlife Trade Conference took place in London. Hosted by Prime Minister Cameron and Prince Charles, it was the highest level gathering of international leaders to date to address the illegal wildlife trade.

Forty-six countries and 11 UN organizations signed the London Declaration. Its measures include the pledge to eradicate markets for illegal wildlife products; ensure effective legal deterrents; treat wildlife trade as a serious crime within the UN convention against transnational organised crime; address problems of corruption and money laundering related to wildlife crime with legislation for a zero tolerance policy; strengthen law enforcement; and support sustainable livelihoods for communities affected by wildlife crime. Conference participants committed more financial resources to implement these measures, and to assess progress made in delivering on these political commitments.

Action for Elephants UK along with Care for the Wild held a peaceful demonstration outside the summit, calling on the delegates to take strong measures to protect elephants and stop the poaching. Along with many conservationists and other wildlife groups, we felt the declaration didn’t go far enough, and that a critical opportunity to implement stronger measures was lost. Furthermore there was no message or action from China (other than it signing up to the general declaration), and, most crucially, NO BAN of any kind was announced.

Some press notices of the Summit:

Some photos of our demo outside the Summit … and here. 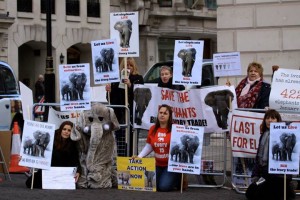 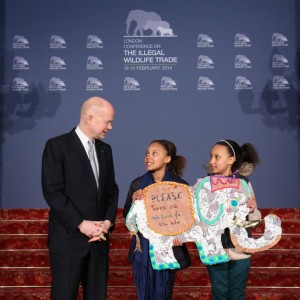 Foreign Secretary William Hague meets with Imani and Tuni Hinstridge (Action for Elephants’ youngest activists) on the concluding day of the summit.