London marched on October 3rd along with more than 130 cities across the world!

An estimated 1,000 people marched through central London, including 96 costumed elephants who stole the show!

The march ended in Whitehall where we heard 4 inspirational speeches from Nicky Campbell, Dominic Dyer, Philip Mansbridge and our guest speaker Ian Musyani from the Malawi High Commission.

The event concluded with our delivering a letter to No. 10 Downing St, signed by NGOs, conservationists, MPs and celebrities, calling on David Cameron to keep his pledge and ban all ivory trade in the UK.

Article on march in SW Londoner. 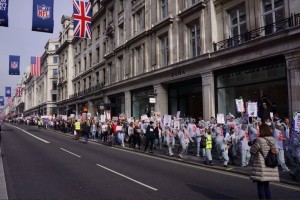 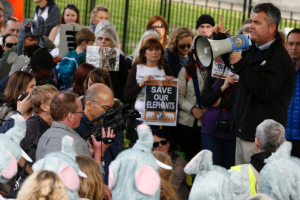 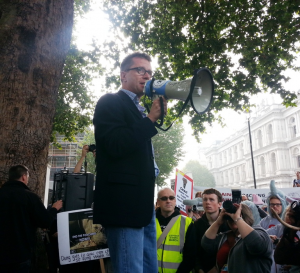 The 96 costumed ellies gather at the start of the march in Cavendish Square. The number represents the approximate number of elephants killed EVERY DAY for their ivory.

SHOUTING LOUDLY for the voiceless!

Drummer Luyanda Jezilea at the head of the march