“I can watch elephants (and elephants alone) for hours at a time, for sooner or later the elephant will do something very strange such as mow grass with its toenails or draw the tusks from the rotted carcass of another elephant and carry them off into the bush. There is mystery behind that masked gray visage, and ancient life force, delicate and mighty, awesome and enchanted, commanding the silence ordinarily reserved for mountain peaks, great fires, and the sea.”   Peter Matthiessen

Millions of elephants once roamed Africa – 90% of them are gone

Around 100 years ago, there were over 5 million elephants across Africa. In 1979 there were 1.3 million. From 1979 to 1989 over 50% of the elephant population was wiped out. This led to an ivory ban in 1989; at that time, there were only 600,000 elephants left across the whole continent.
The ban succeeded in dramatically reducing poaching and allowing decimated populations to recover.  But the respite was short-lived. The decisions by CITES in 1999 to allow so-called ‘one-off’ sales of stockpiled ivory‘ by some range countries to Japan, and again in 2002 and 2008, had predictably catastrophic consequences. This led to a fresh surge in poaching in which hundreds of thousands more elephants were slaughtered to feed the soaring global demand for ivory.

In 2016 the first ever aerial census of Africa’s elephants took place. The Great Elephant Census (GEC), funded by Paul G Allen and carried out with the aid of NGO Elephants Without Borders and many others, revealed a shocking decline in elephant populations that was beyond the worst expectations.

In just seven years, between 2007 and 2014, elephant numbers plummeted by at least 30% – around 144,000 elephants. Specific areas fared even worse: in Tanzania’s Selous Game Reserve and in Mozambique’s Niassa Reserve, elephant populations fell by over 75% in this period, as poachers wiped out entire herds at a time.

The current rate of species decline is 8% per year, primarily due to poaching (with a greater decline from 2007 to 2014).  If this rate continues, elephant numbers could halve in nine years if nothing changes, and localized extinctions will accelerate.

Around 84% of the populations surveyed were in legally protected areas while 16% were in unprotected areas. However, high numbers of elephant carcasses were discovered in many protected areas, indicating that elephants are struggling both inside and outside parks.

The greatest declines of elephant numbers were in Tanzania and Mozambique, with a combined loss to poaching of 73,000 elephants in just five years. Another shocking discovery was made in northern Cameroon, where survey teams could counted no more than 148 elephants – along with many carcasses – revealing a tiny regional population in immediate danger of extinction.

By contrast, South Africa, Uganda, parts of Malawi and Kenya, and the W-Arli-Pendjari conservation complex – the only area in West Africa with significant numbers of savanna elephants – were found to have stable or slightly growing herds.

Botswana remains the continent’s elephant stronghold, with 130,000 elephants, concentrated along the Chobe and Savuti river systems in the north and in the vast wetland oasis of the Okavango Delta.

Zimbabwe showed the second highest number of elephants – 83,000 – mostly along the Zambezi River and in Hwange National Park. Overall, Zimbabwe’s population has dropped 10% since 2005.

Zambia recorded 20,839 elephants, an 11% decline during the past decade. But a regional population in the southwestern corner of the country has been even worse hit by poaching: researchers counted just 48 elephants in Sioma Ngwezi National Park, down from 900 in 2004. At the current poaching rate, this local population also faces imminent extirpation.

Angola too gave a shock. Once hoped to be a refuge for elephants after decades of civil war, it now has one of the highest poaching rates on the continent, leading to a 22% drop in elephant numbers since 2005.

Namibia was the only country with a significant elephant population that opted not to participate in the census. Wide-ranging surveys conducted there in 2015 yielded an estimate of nearly 23,000 elephants.

Africa’s forest elephants have fared even worse: more than 25,000 of Gabon’s forest elephants, some 80% of the total population, were killed in just 10 years , between 2004 and 2014. In that period, the number of elephants in and around Gabon’s Minkébé National Park plunged from about 35,000 to about 7,000. (You can find more information and links in New Paper on Decline of Elephants In Minkébé NP, Gabon.) 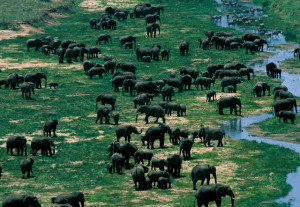