Death from the air, in the water, on the ground – nowhere is safe any longer for elephants

Blood ivory is big business, and traffickers have become increasingly sophisticated and ruthless. A military-style arsenal of weapons is used now to kill elephants – armed militia in low-flying helicopters mow down entire herds with AK-47s; rocket-propelled grenades, assault rifles, silencers, and night-vision equipment are all being used in the genocide. Deadly poison in the water is used to kill large numbers of elephants and other wildlife which come to drink at a water hole.

Spears, traps, poisoned arrows, and bullets are used by villagers as well, as the elephant-human conflict intensifies due to loss of habitat and other factors. 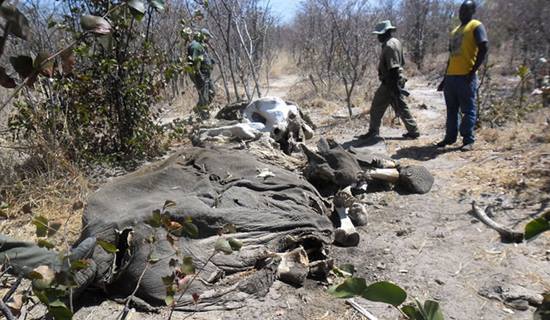 The carcasses of elephants killed by poachers.

Civil wars and local conflicts and militias also take a heavy toll on elephant numbers. The war in the Democratic Republic of Congo had a devastating impact on elephant populations, including those in parks and reserves. In South Sudan the civil war that lasted for about three decades reduced the elephant population from over 130,000 in the early 1980s to only around 5,000 left now. In Cameroon’s Bouba N’Djida National Park, in February 2012 around 200 elephants were killed by heavily armed militiamen. Such ruthless decimation, which is taking place across elephant-range states in Africa, must be tackled with the strictest laws and law enforcement and the combined political will to end poaching.