Elephant poaching has given rise to security and terrorism concerns across central and eastern African countries.

Many poachers and ivory traffickers are funded and supported by organised gangs and criminal syndicates with ties to terrorist groups. Ivory has become the ‘white gold’ of Jihad militants, with funds from ivory sales helping to finance groups such as Somalia’s al-Shabaab (the al-Qaeda linked group responsible for the violence in a Nairobi mall in September 2013), Uganda’s Lord’s Resistance Army, and Sudan’s Janjaweed militia. Al-Shabaab earns between $200,000 and $600,000 a month from ivory sales; around 40% of the funds it needs to undertake its terrorist attacks comes from ivory buyers and consumers.

Transnational criminal organizations and armed groups are taking advantage of high-level corruption and lack of border security to move ivory across borders and to avoid detection and prosecution. 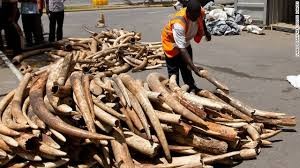 As well as the catastrophic fall in the elephant population caused by poaching, the close connection between poaching and organised crime is taking a heavy toll on local communities and the human population. Rangers are being targeted and killed in growing numbers – over 1,000 in the past decade, plus thousands more are estimated to have been killed locally – while much-needed tourism income is being destroyed.

The groundbreaking documentary ‘Warlords of Ivory‘, the result of a year-long investigation by National Geographic reporter Bryan Christy, reveals the atrocities committed on an almost unimaginable scale by an ivory trafficking network coordinated by two of Africa’s most notorious war criminals.

Christy used a fake elephant tusk fitted with a hidden GPS device to follow the routes of trafficking gangs based in the Central African Republic. From there he was able to track the route taken by the tusk – north to the headquarters of the Lord’s Resistance Army (LRA), led by mass murderer Joseph Kony, and from there further north to Sudan.