Beyond the numbers: grief, anguish, orphans

Elephants are highly intelligent and emotionally sentient creatures that experience many of the same emotions we do. They are known to grieve for their dead, to carry the tusks of dead family members to another place, to cover corpses with branches, to mourn deaths for a long time. They have been seen to weep tears of sorrow, the only other animal besides humans to do so.

With the killing frenzy that has overtaken them, their whole society is collapsing. All the older male bulls have already been killed, leaving no father figures for the sons. Young males often go on the rampage and attack human communities. Now the poachers are targeting the matriarch of the family (the eldest female member) – the core of the family group in whom resides all the wisdom, knowledge and experience that must be passed on to the young, such as where to look for water in times of drought, where to find food, how to look after their young.

Poachers exploit the tight family bonds of elephants – they shoot a baby first, which causes the herd to gather round to protect it, and then mow down the entire herd.

Females, pregnant females and calves are being killed indiscriminately, which means two generations are often extinguished in one murder.

What happens to the babies?

Like a human infant, an elephant baby cannot survive without the loving care of its mother.  Orphaned African elephants are succumbing in droves to starvation, grief and death.  All the elephants that are under 2 years old when their mothers are killed will die unless they are rescued.  The over-2’s sometimes survive by befriending other orphans or trying to join another herd that will adopt them, but they are forever traumatized by the horrific killings they have seen and the grief of losing their mother and herd. 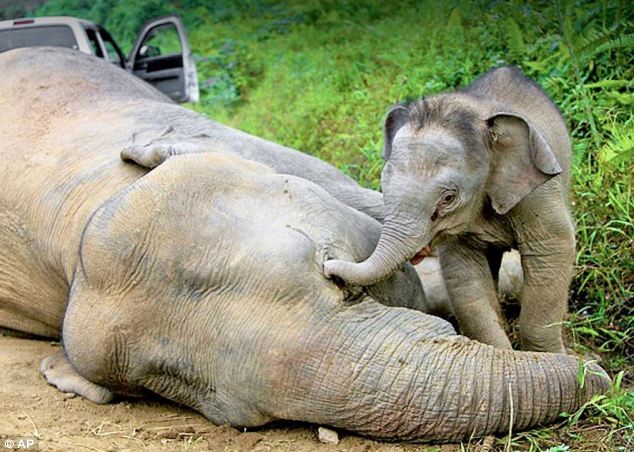 Even if the calves are rescued, mortality rates are high. The babies are fully dependent on their mother’s milk until they’re 2 years old and are not fully weaned until around 4 or 5 years. Many are so traumatized and grief-stricken by what they’ve witnessed and losing their families that they lose the will to live … many of them die even with the best care.

Nurturing and caring for these orphans is a slow process of several years, requiring love and devotion and continual care, until they are fully recovered and able to be returned to the wild.

The chief organization dedicated to caring for these orphans is the David Sheldrick Wildlife Trust. They now have more orphaned elephants to care for than ever before, and they need your help; whatever you can donate will be so valuable in helping to care for these poor orphaned youngsters.