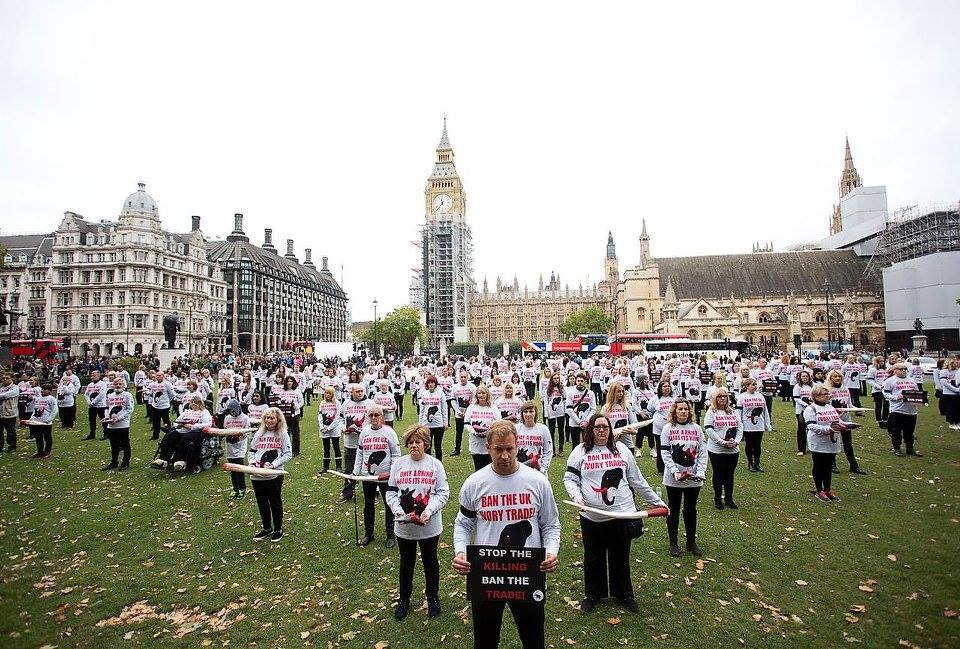 On that day, over 100 cities around the world marched as one voice to call on their governments to ban all ivory and rhino horn trade, both domestically and globally, and to take urgent and concerted action to protect and save these two species that are threatened with extinction. In London we didn’t march this year – we stood in silence, as a tribute to the hundreds of thousands of elephants and rhinos brutally killed for their tusks and horns.

Although global resolutions to ban ivory trade were made at the CITES conference in 2016, this trade (both legal and illegal) continues to flourish in many countries, including the UK. As the largest exporter of ivory in the EU, as well as allowing a thriving legal ivory trade at home, the UK has played a major role in keeping ivory markets open. This has made it a complicit player in the ongoing poaching that is driving elephants to extinction in the wild. It’s a shameful position for this country to hold.

But change is in the air!  The day before this event we heard that the government had announced it will pursue a full ban on all ivory trade in the UK – the best news we could have hoped for!  The ban is to include ivory of ALL ages, including antiques, though there will be a few exemptions (which we generally accept). There will now be a consultation period until Dec 29th, during which arguments will be put forth by all sides with an interest in the ban. Efforts will be made by the antiques trade to water down the ban and increase exemptions.

Public comment is welcomed for the consultation, and we encourage everyone to add their voice in some form in support of a full ban – either with a letter to their MP, or filling out the DEFRA survey, or emailing a comment.  While the government announcement is hugely welcome, the ban hasn’t happened yet – and the next 12 weeks are crucial to ensuring this ban goes through with no compromises. And the bigger the public response, the more chance of that happening!

The silent protest proved a remarkable experience for every person involved with it. Our huge thanks go to the participants who stood in silence and solemnity for 30 minutes to remember the fallen – the millions of elephants and rhino mown down for their tusks and horns.  Many people told us afterwards of the emotional impact of the silent protest and the day in general. The talks by our 5 speakers added yet more emotion, as they all spoke movingly of their own experiences and their efforts to improve the plight of elephants and rhinos.

Before the silent protest we delivered our letter to No. 10 Downing St. Since the news of the ban announced by the government arrived the night before, we wrote a new cover letter to acknowledge this step. In that letter we say:

“We hope the government will not weaken in its resolve and that the ‘ban will prohibit the sale of ivory items of all ages’, as stated by DEFRA. Once implemented, this ban will put the UK at the forefront of global efforts to end the trade in ivory that has fuelled the catastrophic decline of elephants, and will enable it to stand proud on the international stage and as the host of the 2018 conference on the illegal wildlife trade.

We look forward with much hope and expectation that your government will follow through with a comprehensive ban on ivory sales in the UK as quickly as possible.”

We were honoured to have at our event these speakers: Sangita Iyer, filmmaker, ‘Gods in Shackles’; Duncan McNair, founder of Save The Asian Elephants; Dan Richardson, actor, wildlife patron;  Will Travers, President, Born Free Foundation; and Rory Young, Chengeta Wildlife.

Please continue to take action by adding your comment to the consultation!

A walk around the diamond – over 200 people stand in silence to remember the millions of elephants and rhinos killed.

And another video of the event –