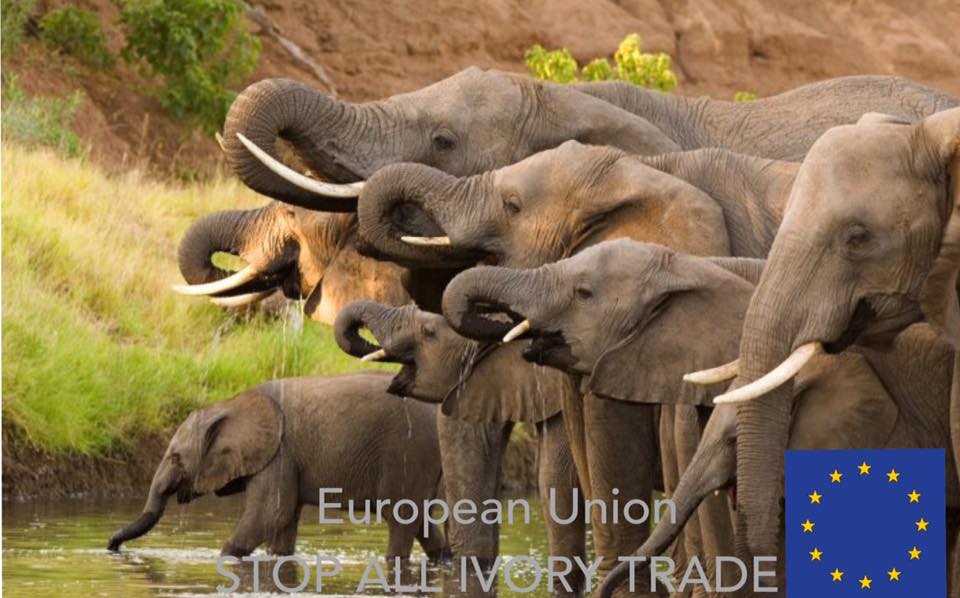 ‘We need action across all 28 member states to stop the current purge on elephants.
Let’s act now before it is too late.’
Catherine Bearder, MEP

The European Parliament voted by a very large majority to support the fight against wildlife trafficking. Included in the text of the adopted resolution was a call for The EU to introduce a ‘full and immediate’ ban on the trade of ivory within the EU.

The ban ‘calls for the full and immediate ban at European level of trade, export or re-export within the EU and to destinations outside the EU of ivory, including ‘pre-Convention’ ivory, and rhino horns; calls for the establishment of a mechanism to assess the need for similar restrictions for other endangered species’ (EU Parliament Resolution on the EU Action Plan Against Wildlife Trafficking, Clause 58).

The European Parliament sent this to the European Commission which has responded to Clause 58 of the resolution by commissioning a consultation on a possible ban on the ivory trade both within and outside the Union’s borders. All EU citizens and other interested parties are invited to take part in the Consultation via an online survey.

This is a great opportunity to become involved in forging European legislation that can be of great benefit to saving elephants from extinction in the wild. The European Parliament is fully (almost unanimously) supportive of this measure, so let us support them to end this cruel trade.

Please add your voice to this historic step for elephants – let’s end the ivory trade in the EU!

We encourage everyone to take part in the consultation!  This is our chance to persuade the European Commission government that this ban is critical for the future of elephants, and that EU citizens support the Resolution voted on by the European Parliament. Success at this level will be a very important part in ensuring that the global ivory trade can be ended for good.

We need to ensure that the ban is enacted with no room for loopholes, no ambiguities in interpretation, and is backed up with the funding and resources needed to implement it. It also must ensure that penalties are severe enough to act as a credible deterrent to these crimes.

Remember that the opposition (the antiques trade) will be presenting strong countering arguments to maximize exemptions and special allowances for antiques containing ivory.

The Consultation only accepts responses via the online survey, which can be completed in English, French, German, Italian, Portuguese or Spanish.

The completed questionnaire below provides answers and guidance – you can use as much or as little of it as you like (you can copy and paste), and also feel free to add your own comments.

* Please encourage your friends and family to submit responses to the consultation. Every response counts!

* Write to your MEP and urge them to make their own submission to the consultation.

MEPs’ Report on the EU Action Plan Against Wildlife Trafficking

Status of Elephant Populations, Levels of Illegal Killing and the Trade in Ivory: A Report to the CITES Standing Committee

Decline in the Legal Ivory Trade in China in Anticipation of a Ban. Save The Elephants, 2017

Now is the Time for an EU-Wide Ivory Ban, The Parliament Magazine, 2017

What Has The EU Got To Do With Elephant Protection? New Europe Magazine, 2017