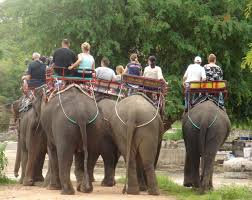 Elephant rides/trekking camps are common in Vietnam, Nepal, Cambodia and particularly Thailand. In Thailand, elephants had been used in the commercial logging industry for centuries. When this process was outlawed by the Thai government in the late 1980’s it left thousands of elephant owners without an income. This void was quickly filled by transferring the animals to trekking camps to provide rides and other forms of entertainment (tricks, painting, football, swimming, etc) to tourists. Despite their size and strength, elephants are not physically equipped to have people on their backs; riding elephants will result in painful arthritic conditions which do not occur in wild animals.

Life at a trekking camp is filled with physical abuse, beatings, hunger, dehydration and enslavement in chains. As with the temple elephants in India, there is no treatment for any of these creatures and their health is left to deteriorate. Animal retaliation is another consequence of abuse that these animals share with their counterparts in the temples of India, often with fatal consequences. In Vietnam in 2015, two elephants dropped dead of exhaustion with tourists on their backs (no tourists were hurt on these occasions).