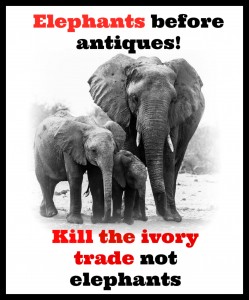 Protest against the sale of ivory in the antiques trade

We will be demonstrating on July 1st at the Art & Antiques Fair at Olympia London to oppose the ivory trade in the UK. The event represents one of the largest antiques fairs held in the UK.

Why the antiques trade?

The British Association of Antiques Dealers (BADA) is the only professional body that has spoken out against a full ivory ban, with a vocal and influential minority of  high-end dealers in the trade finding a receptive ear in Theresa May’s government. These traders want to continue to reap profits from selling ivory, and argue that the sale of antique ivory has no connection to poaching – a false and misleading argument which the government seems to have bought into.  As has been shown time and again by investigations into the trade, any legal trade in ivory serves as a cover for illegal ivory to enter the market. This feeds demand, which in turn continues to provide an incentive for poaching to continue … and the bloody cycle continues.

Though this direct link between a legal ivory market and the ongoing poaching has been proven, antiques traders refute the evidence. They sometimes portray the pro-ban lobby as an enemy of Britain’s ‘cultural heritage’, wanting to destroy works of art with ivory in them – an accusation with no basis in fact.  No campaigners are calling for the destruction or confiscation of ivory in museums or personal ownership – the call is purely for a trade ban, thus devaluing ivory commercially and removing it from circulation.

At the current levels of poaching, African elephants face extinction in our lifetimes.  How can the UK, in collusion with the antiques trade, not be doing everything it can to stop this slaughter?

Elephants are in crisis

30% of Africa’s elephants were wiped out between 2007 and 2014. That’s around 144,000 elephants killed in 7 years. More than 20,000 elephants are still poached each year. At the current rate of decline, African elephants are on the path to extinction and we could lose them within a decade.  Forest elephants have declined by over 60% between 2002 and 2011.  Current estimates put Africa’s elephant population at approximately 415,000 compared with 10 million a century ago.

These figures are shocking and numbing. It is appalling that this government is unmoved by the scale of the slaughter, which brings in its wake criminality and violence, local instability and conflict, and enormous human tragedy as well, especially the brutal deaths of park rangers – over 1,000 of these brave men and women have lost their lives to poachers over the past decade.

As the largest exporter of ivory in the EU, as well as allowing a thriving legal ivory trade at home, the UK plays a major role in keeping these markets open. By allowing this situation to continue, the UK is also failing its African partners in the fight against the illegal wildlife trade, and failing to show leadership in the international commitments to close ivory markets globally.

It is shameful that this government has backed away from the full ban it promised in two consecutive manifestos and has removed entirely from its 2017 manifesto. Furthermore, it has reneged on the commitments it made at the CITES CoP meeting last September, where all countries agreed to closing ivory markets globally.  Other countries have led by example, with the USA and, most crucially, China both implementing bans on the domestic ivory trade. The British government must take the same step, and put the survival of a species above the self-serving interests of a small number of merchants.

Please join us at Olympia and make a stand for elephants – they need you! 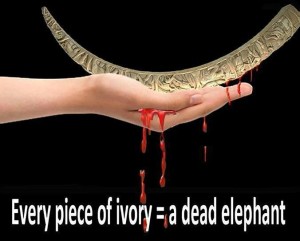