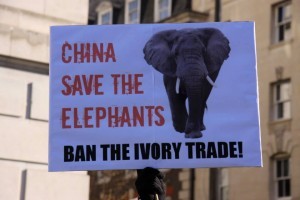 The ban succeeded in dramatically reducing poaching and allowing decimated populations to recover.  But the respite was short-lived. The decisions by CITES in 1999 to allow so-called ‘one-off’ sales of stockpiled ivory by some range countries to Japan, and again in 2002 and 2008, had the predicted catastrophic consequences. This led to a fresh surge in poaching in which hundreds of thousands more elephants were slaughtered to feed the soaring global demand for ivory.

The biggest force behind the escalation of poaching was the demand for ivory in the Far East, above all from China, the world’s largest consumer of ivory. The demand for ivory soared in the new millennium as China’s rising, newly-affluent middle class could afford to buy carved ivory objects, seen as status symbols. Elephants were being annihilated so their tusks could be turned into trinkets.

Within just a few years, this market grew to account for 70% of the global demand.

But other countries also played a huge part in the consumption of ivory – the USA was the second biggest global consumer, and legal and illegal markets flourished in the UK and the rest of the EU.

Poaching surged between 2007 and 2014, with an estimated 96 elephants being slaughtered every day. At these levels of poaching, it was feared that elephants would become extinct within a generation.  It was critical to get a baseline assessment of how many elephants were left on the continent.

The Great Elephant Census  took place in 2016, and the results were far worse than expected.  They showed that in just 7 years Africa had lost one third of its savanna elephant populations in almost all of the countries surveyed (15 out of 18).

Pressure grows for a ban

The focus was now on China, and international pressure grew for a domestic ivory ban in China. 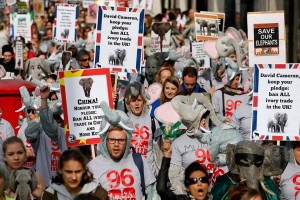 Grassroots activists took to the streets and marches were organised by the Global March for Elephants (GMFER) across 6 continents, in over 150 cities around the world – the largest ever gathering of people to unite to save a species. The US State department  acknowledged the marches as one of the biggest wins for elephants in 2015: ‘According to experts, these marches keep political pressure on leaders to protect the world’s largest animal.’  Action for Elephants held protests outside the Chinese embassy in London and our open letter to the Chinese premier received worldwide media attention, as well as a letter of thanks from Prince William.

Historic steps are taken by the US and China

At a meeting in September 2015 between President Obama and President Xi, the leaders of the world’s two biggest ivory markets agreed to take joint action to enact bans on the ivory trade in their countries. This was the single biggest step that could be taken to slow the rampant poaching, yet many people remained skeptical. But then the pace gathered.

In June 2016, President Obama fulfilled the commitment made during that meeting and imposed a near total ban on the commercial trade of ivory.

In December 2016 China announced its own timeline for closing down its domestic ivory trade in the space of one year. By the end of March 2017 the government closed down 67 of its licensed ivory facilities, including 12 of its 35 ivory carving factories and dozens of its more than 130 ivory retailers, and promised to close the rest by the end of the year.

Then on 31 December 2017 China announced the complete closure of its domestic ivory market and a ban on all commercial trade in ivory. This remarkable step by China, and the short time in which it was achieved, was more than anyone had dared hope, and was seen as a lifeline for Africa’s elephants.

What does the China ban mean for elephants?

Immediately after China’s ivory ban was announced, the price of ivory fell by as much as 50-60%.

But for the ban to work, the laws must be enforced, and raising awareness about the ban and reducing demand for ivory are critical to its success. Crucially, neighbouring countries must follow suit, and international pressure must now be focussed on Vietnam, Laos, and Myanmar, where the trade in ivory and illegal wildlife is booming after the closure of China’s market, and on Japan, which  and shut down markets across Asia.

In January 2018 Hong Kong announced it would ban domestic ivory sales, to be implemented in three phases and to culminate in the destruction of ivory stockpiles and a total ban on sales by 2021. Japan and Laos have thriving ivory markets, and must be pressured to bring in bans. Vietnam has a burgeoning illegal trade in ivory, with a reported ten-fold increase in ivory artisans between 2008 and 2016 and a six-fold increase in ivory items for sale in the same period. Thailand is working to enforce stricter controls on its ivory trade with the aim of bringing it to an end.

It is still too soon to know how the China ivory ban will impact on poaching and putting the brakes on elephants’ trajectory towards extinction. Wherever they live in the world, elephants face many other threats to their survival, including loss of habitat and escalating conflict with humans everywhere. And though their ivory will be less in demand, a whole new industry based on killing them is taking off – in products made from elephant skin.

But the importance of closing the world’s biggest ivory market cannot be underestimated, and China’s leadership is to be commended and thanked for taking this decisive and bold step. In the story of their survival, 2017 will prove to be a game-changing year for elephants, thanks to China’s ban.