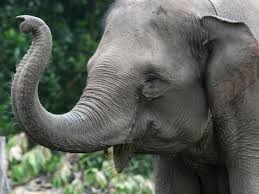 The Asian elephant (Elephas maximus) is found in India, Nepal, Sri Lanka, Malaysia, Thailand, Vietnam, Indonesia (Sumatra), and Borneo. It comprises three subspecies – Indian, Sumatran and Sri Lankan. Though smaller than their African cousins, Asian elephants are still the largest land mammal on the continent.  They have proportionately smaller ears and only the males have tusks.

Asian elephants are under severe threat and declining rapidly in numbers. They have been listed as endangered by IUCN since 1986, and their population has declined by at least 50% over the last 60–75 years. There may be as few as 40,000-50,000 remaining in the wild.

The main threats to the species are loss of habitat, human/animal conflict, poaching (although not to the same extent as the African elephant), and capture for entertainment, tourism, and religious purposes.